After a solid night of sleep, when you step out of bed and stretch, you may experience discomfort, aches, or joint pain.

Fortunately, you don’t have to deal with the pain, suffering, and cracking sounds; there’s a way you can combat the discomfort and make getting out of bed a whole lot easier and more enjoyable.

But what exactly is cryotherapy and what are the benefits of cryotherapy?

To learn more about cryotherapy, the benefits it offers, and why you should consider adding cryotherapy treatment to your recovery routine, keep on reading. 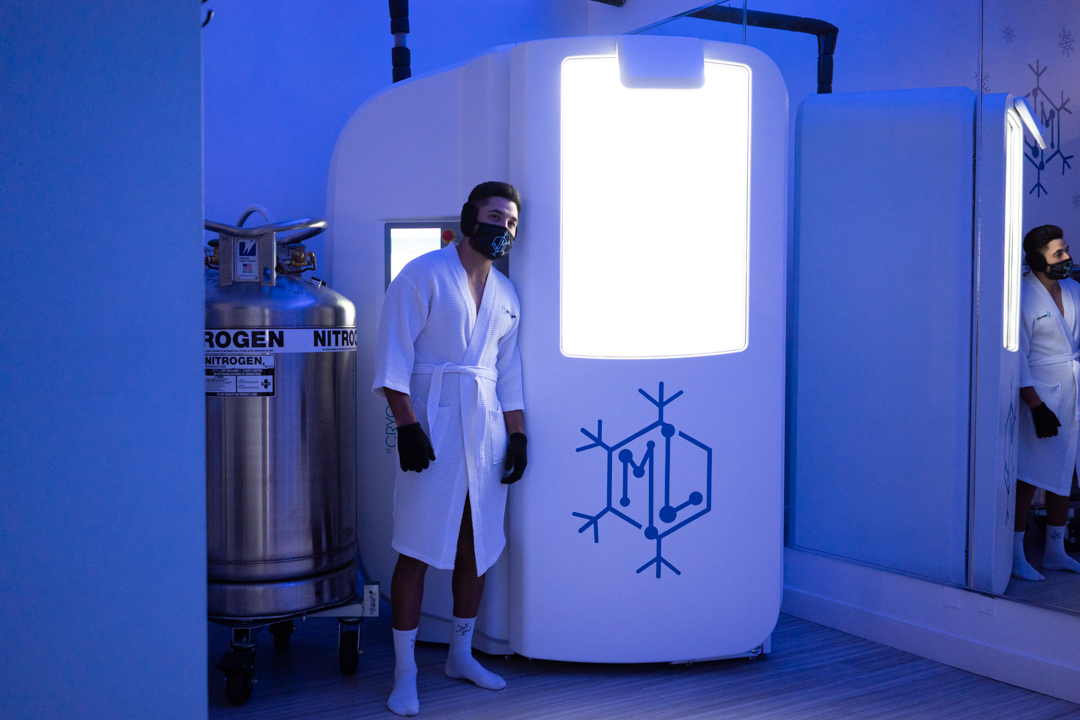 What is cryotherapy anyway?

Cryotherapy literally translates to “cold therapy”. It’s a technique that involves exposing the body to exceptionally cold temperatures over the span of several minutes.

The therapy can be applied to one particular area (known as “localized cryotherapy”), such as the legs or the arms, or it can be delivered to the entire body, (referred to as “whole body cryotherapy”).

A variety of techniques can be used to administer localized cryotherapy; the application of ice packs, coolant sprays, ice massages, or even by administering probes into the tissues of the targeted area, for example.

While localized cryotherapy does have its place - to treat areas of the body that are particularly problematic, whole body cryotherapy treatment has found popularity in chronic pain relief with many sports medicine enthusiasts. 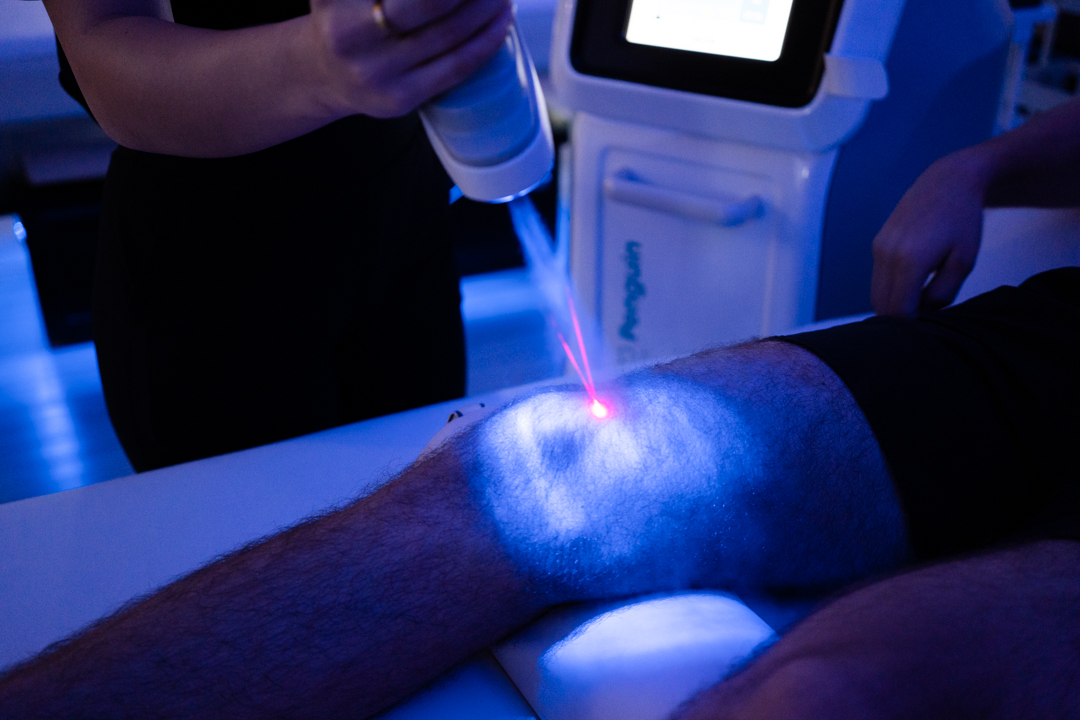 How does Whole Body Cryotherapy work?

Whole body cryotherapy (often referred to simply by its acronym, “WBC”), is pretty simple and straightforward.

With whole body cryotherapy, with the exception of the head, the entire body is immersed into very cold air for several minutes.

You step into an enclosed cryo sauna chamber, which surrounds the entire body and features an opening above for your head.

Once the cryotherapy chamber is closed, liquid nitrogen is released to reduce the temperature by as much as 300 degrees F, or about -280 degrees F.

The session is brief, lasting for an average of two to four minutes, but no longer than 5 (and it can be shorter, if you prefer). So, what are the benefits of cryotherapy? Research is on-going, but the findings of several studies have been completed have found that the list of benefits are long.

Some of the most notable benefits of cryotherapy for weightlifters and body builders include the following:

There are proven weight loss benefits of cryotherapy. While it doesn’t directly cause weight loss, the very cold temperatures boost the metabolism, which in turn aids in weight loss.

Research studies have found that exposure to extremely cold temperatures can increase the body’s metabolic rate while it’s returning to normal body temperature after the therapy session is completed. Inflammation is common among weight lifters. When too much strain is placed on the muscles, tendons, and joints, the body inflames the tissues of the affected area in an effort to protect it.

Numerous studies have confirmed that cryotherapy can successfully promote muscle healing and reduced inflammation, as exposure to extreme cold boosts the presence of the cytokine proteins IL-6, IL-1Ra, and IL-10. Cytokines, specifically interleukins (IL) are responsible for managing the signaling of cells within the immune system, creating a response that supports a healthy, more effective inflammatory response, and thus, reducing inflammation and the side effects that are associated with it.

Chronic Inflammation is common among weight lifters. When too much strain is placed on the muscles, tendons, and joints, the body inflames the tissues of the affected area in an effort to protect it.

Numerous studies have confirmed that cryotherapy successfully reduces muscle soreness and inflammation, as exposure to extreme cold boosts the presence of the cytokine proteins IL-6, IL-1Ra, and IL-10.

A lot of athletes – including weight lifters – use whole body cryotherapy as a way to treat injuries from intense exercise, and that’s largely because it can effectively numb pain.

Injuries can irritate the nerves, and that irritation can result in pain. This pain can lead to chronic fatigue and a distorted pain perception.

Extremely low temperatures in the cryo chamber can numb irritated nerves, and thus, reduce the pain that a person may be experiencing.

Cryotherapy is an effective way to ease the discomfort that’s associated with pinched nerves, back pain, and even acute injuries.

Studies have also found that whole body cryotherapy has major health benefits that boost and enhance the function of the immune system.

After the body has been exposed to extremely cold temperatures in a cryogenic chamber, blood flow increases in order to return the body to normal temperature.

Increasing the flow of blood supports the detoxification process and increases the production of monocytes and lymphocytes, two kinds of white blood cells that combat foreign invaders that enter the body.

As your white blood cell count increases from the extremely cold air, your whole body becomes more effective at reducing virus and cancer cells in the body.

Those who suffer from skin conditions also benefit from whole body cryotherapy in a cryogenic chamber.

Studies have found that exposing the body to subzero temperatures minimized atopic dermatitis, a skin disease that is marked by chronic inflammation and causes excessive dryness and itching.

Since whole body cryotherapy can boost antioxidant levels in the blood and minimize inflammation, it helps to alleviate the side effects that are associated with atopic dermatitis, as well as other skin conditions. A study found that whole body cryotherapy dramatically reduces the pain in participants who were diagnosed with rheumatoid arthritis and fibromyalgia patients.

Not only did it help to directly alleviate discomfort, but whole body cryotherapy made it possible for participants in the study to progress in the healing process of occupation therapy and physiotherapy, increasing the efficacy of rehabilitation.

How does Cryotherapy Reduce Stress?

In these studies, patients who practiced cryotherapy saw a dramatic reduction in how they managed stress and anxiety disorders after just a few minutes in the cryo chamber.

Here’s a look at how rapidly cooling the body to sub-zero temperatures can help to reduce your stress and anxiety and make you feel a whole lot “chiller”.

Endorphins are hormones that are located with the brain and the central nervous system. These hormones promote feelings of well-being, and provide analgesic (pain relief) effects.

Endorphins are commonly triggered by activities that excite the body, such as exercise and sex, but it’s been found that the rapid and drastic reduction of body temperature also triggers the release of endorphins.

These hormones help to enhance mood, boost cognitive function, and can provide temporary relief for mental health issues, such as stress, depression, and anxiety.

Thanks to the rush of endorphins that are sent throughout the blood vessels that flows through your body during a whole body cryotherapy session, it can immediately boost your mood.

The mood enhancing effects aren’t just short-term, they can last for several hours, and studies suggest that if practiced regularly, may be able to offer long-term mood improvement. Several studies that examined the effects of whole body cryotherapy on mental health have found that it helps to minimize cortisol levels. Cortisol is a hormone that the body produces when it feels stressed-out, nervous, or on-edge.

The purpose is to trigger the “fight or flight” response so that if you were in real danger, your animal-like instincts would kick in and you could protect yourself or your loved ones.

Higher cortisol levels are common in people with depressive and anxiety disorders. The physiological hormonal responses are heightened in many people with anxiety which causes them to feel the physical effect of anxiety.

People who are also exposed to prolonged stress, can produce high levels of cortisol, and the production of the hormone can continue for long periods of time.

Cryotherapy treatments help slow the production of cortisol levels, which in turn can help to reduce the stress levels that you are experiencing.

It’s no secret that sleep is vital for your overall health and well-being; however, given the chaos of the world combined with the stress of day-to-day life, so many people aren’t getting the sleep that they need.

With regular cryotherapy sessions, however, you may be able to get a better night of sleep.

Not only will you fall asleep easier, but you’ll stay asleep longer, and your sleep will be more restful.

Are there any side effects?

Generally speaking, most people tolerate cryotherapy well; however, we’d be remiss if we didn’t mention some of the side effects that some people experience.

Temporary reddening of the skin, tingling, and numbness may occur post-therapy; however, these effects are usually very mild and are short-lived.

At Muscle Lab, one of the most highly regarded muscle recovery and wellness lounges in Los Angeles, we offer a variety of services that are intended to help professional weight lifters and lay bodybuilders alike improve their recovery and get the most out of their workouts.

Of all the services we offer, cryotherapy is, hands down, one of the most popular, and for good reason – it offers a myriad of benefits.

If you’re interested in learning more about cryotherapy or you’re ready to schedule your first appointment, get in touch with LA’s leading muscle recovery, wellness lounge, and cryotherapy spa: Muscle Lab.